HOW TO GET RID OF WASP & HORNET INFESTATIONS

Stinging insects are a constant threat to those around us. People have learned to fear wasps and hornets because their stings are incredibly painful. For those who allergic to the venom they produce, stinging insects are a constant threat that could be fatal. Even though these insects are beneficial and have their place in our ecosystem, they aren’t something you typically want on your property, including around young children, pets, or anyone who might be allergic. This is particularly true inside your home, where a single sting could really ruin your day, and that’s if you aren’t allergic.

If you’re having issues with stinging insects invading your property, be it a hive of hornets or a nest full of angry wasps, Hawx Pest Control is the name to call. We offer comprehensive pest control services, including using the industry’s leading techniques and products to obtain successful and ongoing results. Our goal is to do so much more than get rid of your issue; it’s to give you peace of mind of knowing that your property is safe, and that you don’t have to worry about the threat of stinging insects always hanging around your family and loved ones.

Wasps are different from bees and ants because of their slim body shape and almost hairless legs. They are predatory or parasitic, meaning they can attack their prey or feed off of a host to survive. They have pincers in their mouthparts, stingers with barbs that can be removed, and two noticeable body segments—a waist and a thorax. Interestingly, not all wasps are winged.

Wasps vary in where they live. The majority of wasp species are solitary wasps. They live in nests by themselves in the ground and dig tunnels for laying eggs. Some solitary wasps build their nests in rotting wood or mud.

The rest are social wasps and function as part of a hive. These are the most well-known types of wasps and are related to hornets and yellowjackets since they belong to the same family—Vespidae. They build their hives in soil, in tree bark, or hanging from leaves, branches, or buildings. 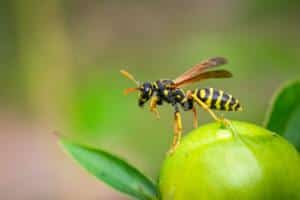 What do wasps eat?

Wasps can feed on fruit, nectar, and some types feed even on the secretions from larvae. Many of the predatory wasp species eat other, weaker species of insects like caterpillars and aphids. Female wasps are known to kill and bring home their dinner to share with the hive. Parasitic wasps feed off of their hosts, which includes eating blood or the body of their host (usually another insect).

Although you may not think wasps can be beneficial, they actually do balance the ecosystem by acting as a form of natural pest control. The insects that predatory wasps eat are often the ones that can destroy crops and vegetation.

How long do wasps live?

While a queen can live as long as a year, most worker wasps are active for 12–22 days.From the end of April to early May in North America, you’ll want to be extra vigilant about stopping social wasps before they settle in some place inconvenient to you. This is the time of year when a queen wasp lays her eggs (which later hatch into the worker wasps) and chooses the location for the new hive. This is also true for hornets as well.

Where do wasps go in the winter?

Like many other species, female wasps hibernate in the winter while the rest of the wasps die off. To hibernate, female wasps may try to invade your home to cozy up in your attic, closet, or basement. These places offer both safety and relative warmth compared to the frigid outdoor temperatures.

Why do wasps sting?

There are two reasons why wasps sting.

Female wasp stingers produce venom, meant for self-defense and swarm protection. Wasp venom contains a pheromone that encourages other wasps to join the party. So, if you get stung, don’t stick around because other wasps may be on the way. Unlike bees, wasps do not die when they sting someone, so stinging allows them to protect their hive.Wasp stings aren’t lethal, but in large quantities, they can pose health risks and reactions.

Why are wasps aggressive?

Wasps are aggressive when they feel threatened. Their sting is how they defend themselves and how they protect their nests or hives. That’s why it’s important to stay still and let them fly away if you find that one lands on or near you. Flapping your arms and screaming may label you as a threat, prompting a sting.

Also, wasps become more aggressive in the late summer and fall seasons. As most of the wasps die off, the lesser numbers are struggling to maintain what’s left of the hive, so they won’t hesitate to sting people more liberally. This is also the time of year when the queens go hibernate elsewhere, essentially leaving worker wasps to fend for themselves.

How to identify yellowjackets, wasps, and hornets

Now that you know a bit about wasps, you’re probably wondering how they differ from other common yet similar pests.

Remember, wasps have two sets of wings and six legs, punctuated by a cinched “hourglass” waist. While some species, like the cuckoo wasp are relatively brightly-colored in blue, red, and black, most are more muted in color and not quite as bright as yellowjackets. Females also sting with their ovipositors, so it serves a dual purpose.

Yellowjackets are actually a type of wasp, although their yellow and black coloring looks more like a honey bee. Sometimes they can also have some whites and reds. Yellowjackets are social wasps and live in hives that are built out of paper-like material. They can be found worldwide.

Their sizing ranges from ½ to ¾ of an inch long, and they also sport a narrow waist. Bees don’t have a narrow waist, they’re much more plump, so you can use that as a clear indicator of the kind of pest you’re dealing with.

Yellowjackets eat nectar and fruit. They also eat protein, even in their larvae stages. They can become territorial over their food and hives and that is typically when they sting.

Hornets are also a species of social wasps. You may recognize their wasp-ish hourglass figure. Hornets coloring can vary from black and white to orange and red. They are not typically yellow in color. They’re also noticeably larger than other wasps.

Hornets eat nectar, sugar, and protein, just like wasps; however, they really love to eat bees. While hornets don’t actually ingest wood, they do chew it to make the literal building blocks of their hives – a strong mix of saliva and munched-up bark. Given that hornets are categorized under the wasp family umbrella, it makes sense that their lifespan is the same (12–22 days for workers and up to a year for queens).

Hornets are fairly passive and won’t get aggressive unless they are directly confronted around their hives. This is good news for most of us since hornets typically build their nests in high locations like roofs, treetops, and other areas off the ground level. The nests can hang from high surfaces as well. Some hornets will build nests in abandoned, protected underground areas like rodent holes. These nests are riskier for humans and pets as they’re easier to step on and cause a defensive reaction from the insects inside.

When hornets sting, it can be more painful and damaging when compared to another wasp’s sting. This is because their stinger and amount of venom in the stinger is much larger than other stinging insects.

Is your property under threat from stinging insects? Contact Hawx Pest Control today for wasp control services in Wilmington, Surf City, Jacksonville, Clinton, Elizabethtown, Rose Hill, Burgaw and Carolina Beach, or one of our other locations.