Dealing With Swarms of Flying Ants

Most of us are familiar with wood-destroying carpenter ants, the small black ants that disrupt picnics, or other types of ants that can infest homes and yards. It can be quite unfamiliar, though, to suddenly see flying ants swarming in or around your home. Learn more about flying ants, where they come from, and what it means if you see them in a swarm.

What are flying ants?

Flying ants are simply various species of ants that are at a life stage where they’ve now sprouted wings. In scientific terms, flying ants are known as alates, a term that refers to the winged form of an insect, particularly ants and termites. The body of a flying ant can be black, brown, or reddish in color, depending on the species. They can grow to be ¼–½ inch in length, although the winged carpenter ants are larger than most other types of ant, at nearly ¾ of an inch long.

Alates, or flying ants, are at a sexually mature stage of life and they’re attempting to mate and reproduce. These reproductive ants are only able to fly during the breeding season, after which a new colony is formed. Only queen ants and male ants have wings and swarm during mating season.

When they are mating and breeding throughout this reproductive season, flying ants swarm in mating flights, often in large numbers that can be disturbing to homeowners. The breeding season for flying ants typically occurs in early summer. 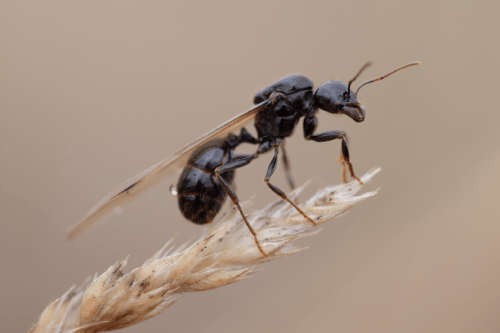 Flying ants, the most common of which are carpenter ants, are easily confused with termites, as they both swarm during the breeding seasons. The two insects look somewhat similar, but there are some differences.

How long do flying ants live?

In some areas of the world, hundreds, sometimes thousands, of dead flying ants can be found just a few days after swarming on what is known as “Flying Ant Day.” In Great Britain, they’ve dubbed this time Flying Ant Day. It doesn’t take place on one specific day, but occurs yearly in the summer.

The swarms of flying alates that take flight each year are composed of males and young queen ants. The male flying ants all die one or two days after the nuptial flight since their only task is to mate with the immature queens who will now form new colonies.

The lifespan of mature queen ants can be more than 10 years since they live mostly in their nest. One study found that a queen ant in captivity could live almost 30 years. Once a queen has mated during swarming season, she will lose her wings and set up a new nest. The queen, in her new nest, lays eggs to make more worker ants, new queens, and males.

Why do flying ants suddenly appear?

Flying ants are also known as “swarmers.” Large numbers of these winged insects may suddenly be seen in your home or on your property when a mating season is beginning. Called a nuptial flight, flying ants all seem to seek out their mates at the same time. This can result in thousands of ant colonies taking flight simultaneously.

Certain environmental conditions can trigger the appearance of some species of swarming flying ants, such as:

Flying ants leave their own colonies to mate with flying ants from other colonies, possibly to ensure a genetic mix that will help the species thrive and adapt. 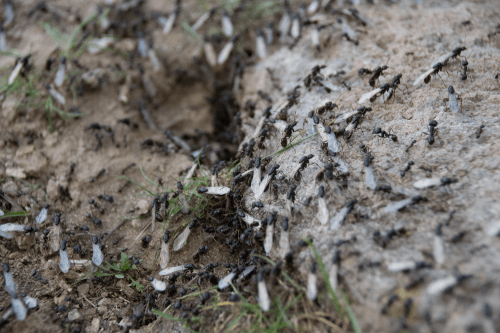 What causes flying ants in your house?

Some queen flying ants will enter a home after the nuptial flight so they can build a new nest. Ants are attracted to moist wood and humid environments, so if your home provides these favorable conditions they may venture inside to start their new colony. A swarm of flying ants can also indicate that an ant colony already exists inside your home. Ants don’t usually travel very far to find new places to build nests.

To keep flying ants from nesting in your home, try the following tips:

How To Get Rid of Flying Ants in Your Home

Once you’ve verified that the swarm of insects in your home is flying ants (and not an infestation of termites), you can take some steps to rid your house of flying ants. If alates are swarming around your house, don’t be alarmed, as they are a harmless, but disturbing, nuisance.

Some ways to get rid of flying ants (and other ants from their colonies that may already be in the house) include:

None of the above methods may actually get to the root of the infestation: the colony that’s nesting somewhere in the house. Hawx Pest Control services can fully inspect your home to locate the nest, if one exists inside. After treating the ant nest with the appropriate products, the pest professionals place bait traps that will continue to work for days. Recommendations will be made to the homeowner on how to make areas of the home less conducive to future ant infestations.