Ladybugs vs. Asian Lady Beetles: How To Tell The Difference

The ladybug is a favorite sight in gardens and has become a symbol of good luck for many gardeners. In recent years, though, there has been an incursion of Asian lady beetles–bugs that look similar to the ladybug, but have a negative environmental impact.

If you’ve noticed ladybugs that appear to be yellow or orange in color instead of their classic crimson red, chances are you’re seeing Asian lady beetles instead of the native American ladybug. Learn more about their important differences and how to deal with them around your home. 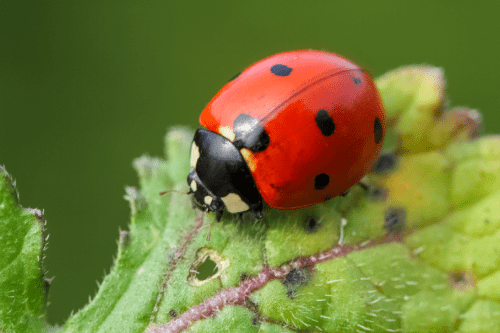 What are Asian lady beetles?

Asian lady beetles are an invasive species that were introduced into the U.S. in the early 1900s and can now be found across North America. Due to its voracious appetite, Asian lady beetles were brought to the U.S. on purpose to aid in pest control in the agricultural industry.

These cheerfully-colored winged insects are very similar in appearance to the American ladybug.

The most definitive telltale sign of an Asian lady beetle is a white mark at the base of the head shaped like an “m” (or a “w” depending on which direction you’re looking from).  Both the Asian lady beetle and the ladybug have white spots on their heads that are placed in such a way to resemble cheeks. 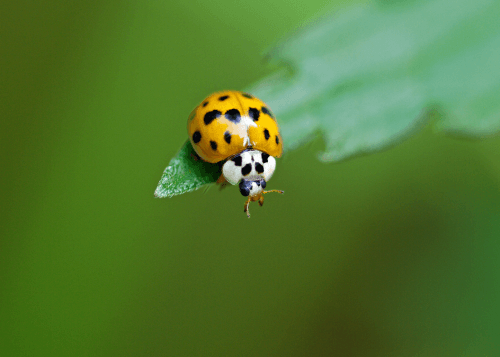 What do Asian lady beetles eat?

Asian lady beetles share another similarity with the American ladybug – their love for aphids, mealybugs, spider mites, and other garden pests.

Gardeners love Asian lady beetles for their natural pest control qualities, but they can become a problem due to their tendency to swarm in certain areas.

Asian lady beetles can bite both humans and pets, but their bite does not pose a serious health risk. It tends to feel like a small pinch. It usually does not result in any swollen, itchy welts.

That being said, they do have unpleasant effects if they infest your home, and are potentially damaging to the native ladybug species. Asian lady beetles are such fierce predators that they could eat the ladybug’s food sources, resulting in diminishing populations.

Lady beetles seek refuge indoors over the winter months, and unlike the American ladybug, they swarm in huge groups. This can be a serious nuisance if they become an infestation in your home.

You may have heard that Asian lady beetles are toxic to pets, but this is largely an exaggeration. Asian lady beetles emit a foul-smelling fluid when threatened, and this fluid can potentially cause short-term soft tissue damage if it’s consumed in overly large amounts. But it’s unlikely that your pet would reasonably be able to eat enough of this fluid to be seriously harmed.

How to get rid of Asian lady beetles

Due to Asian lady beetles’ pinching bite and yellow liquid excretion that smells awful and stains light-colored surfaces,, it’s understandable that you wouldn’t want an infestation of them in your home.

The best way to prevent them from getting into your home in the first place is to make sure all cracks and gaps in the exterior of your home are sealed up before the fall season. Asian lady beetles will look for warm, dry places to overwinter as the weather cools, but if they can’t find a way in, your home will stay lady beetle-free.

If you do find yourself with an Asian lady beetle infestation, the easiest solution is to vacuum them up. You can also sweep them outside, but this carries a higher risk that they’ll leak that unpleasant fluid and odor into your home.

A great way to keep them contained is to use an elastic band to secure an old stocking or nylon onto the hose of your vacuum, then suck up all those unwelcome lady beetles. The nylon will catch them so you can easily take them out of the vacuum hose and seal them into a plastic bag for removal.

Asian lady beetles can be a welcome addition to your garden, but once they get inside, you may want to reach out to your local Hawx Pest Control team if you feel it’s a nuisance.

Nov 21
U.S. Homes Under Attack – Which are the Deadliest Pests in our Backyards?
Pests can be much worse than unwelcome, annoying guests in your home. A recent study from the Wilderness Medical Society ...
View Article
Oct 24
A Landlord’s Guide to Pest Management in Rental Properties
Pests in a rental property can cause conflict between tenants and landlords. With over 16 million American homes reporting seeing ...
View Article
Sep 27
How To Get Rid of Fleas
When your pet has fleas, it may feel impossible to get rid of them completely. That’s because fleas can actually ...
View Article