How Dangerous Are Brown Recluse Spiders?

Brown recluse spiders have an imposing presence. Large in size, usually around the size of a quarter (including their leg span), their reputation precedes them. They’re typically considered to be one of the most dangerous spiders and not a species you want to mess around with. Learn more about how to spot a brown recluse spider, what to do if you see one, and why these spiders are concerning even to the most enthusiastic of insect lovers.

What Are Brown Recluse Spiders?

Brown recluse spiders (also called fiddleback or violin spiders due to their distinctly segmented body shape resembling a musical instrument) can be found in dark places, including those inhabited by humans. They like to hitch a ride on objects that enter your home or slip in via open cracks and crevices in your walls or foundation.

These spiders are tan to gray in color, have six eyes (instead of eight like other spiders), and eight long legs that afford them a great level of dexterity and strength, as well as the ability to climb on a variety of surfaces. Like other spiders, they eat other small insects—dead or alive. 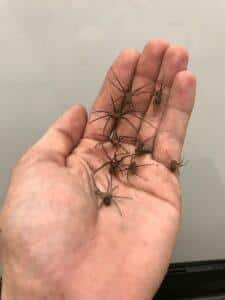 Where Do Brown Recluse Spiders Live?

Typically, brown recluses are only found in South Central states like Oklahoma, Arkansas, and Texas. In the context of your home, they like to hide in places that don’t get disturbed—think piles of yard sale leftovers, storage areas, or garbage bins that rarely get emptied. Given that they can live as long as 2–4 years in an uninterrupted environment with a food supply, it’s best to address a recluse infestation as soon as you find one.

Yes, they are dangerous due to their venom that can be harmful to humans. While they’re not aggressive and won’t go out of their way to attack a human unprovoked, they will bite back if scared or threatened. Bites from a brown recluse can produce necrotic gashes that will grow in size and potentially cause blood clots, in addition to causing serious issues like jaundice, kidney failure, and seizures if left unchecked. 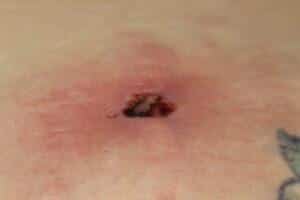 What To Do if You’re Bitten by a Brown Recluse

If any symptoms like nausea and dizziness occur, call a poison control center. Otherwise, wash the bite with soap and warm water, then apply ice, off and on in 10 minute increments.

How To Get Rid of Brown Recluse Spiders

Try these tips to discourage brown recluse spiders from setting up in your home or garage:

If you try these suggestions and you still see brown recluses in your home, it may be time to call a pest control professional who specializes in spider control. They’re trained to handle the most harmful of visitors and effectively target nests so the infestation is out of your home.