What Are Crazy Ants and How Do You Get Rid of Them?

You might have heard them called hairy crazy ants, tawny crazy ants, or rasberry crazy ants—named for exterminator Tom Rasberry, who was the first to spot this type of ant in the states in Texas in 2002. No matter which name you use, this species of ants are named for their way of moving erratically and quickly.

Learn about where to find crazy ants, how to avoid having them nest in your home or yard, and what to do if you find that you have an infestation.

What Are Crazy Ants?

Crazy ants are originally from South America, and since their introduction into the U.S. two decades ago, they have become invasive enough that they are known to displace even the fierce red fire ant in areas throughout the Gulf Coast.

Sometimes called tawny crazy ants for their reddish-brown hue, these insects are small, at only about ⅛ of an inch. Their bodies are covered in coarse hairs that can be seen up close or with a magnifying glass. 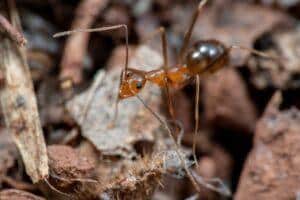 Another less common type of crazy ant is the black crazy ant, which is distinguished by its exceedingly long legs and bluish-black coloring. 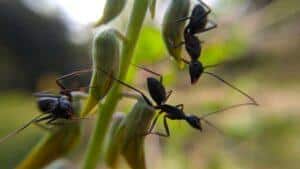 Where Do Crazy Ants Live?

Crazy ants were initially found in Houston, Texas, but they have since moved to other areas in the Gulf Coast region of the U.S. They are different from other types of ants in that they do not build mounds or hills, but rather make their homes in yard waste, under rocks, or inside homes and buildings when the weather turns cold.

What Do Crazy Ants Eat?

Both black and tawny crazy ants are highly omnivorous, foraging far from their nests to bring food back for their queen. They are known to eat other insects whole as well as the secretions from their bodies, sometimes called ‘honeydew’ (not the melon, although they’ll happily eat that, too). They also eat seeds, nuts, and household foods like meat, sugary foods, grease, and other liquids.

Similar to other species of ants, during the mating season, male ants with wings mate with queen ants, who also are winged. Although both reproductive ants have wings, there have been no sightings of them actually flying, even when mating. Instead, they may mate at the edge of their nests.

Crazy ants do not have a stinger, but they do bite and transfer venom via an acidopore on their abdomens. Their bite leaves a red spot on the skin, sometimes with a small pustule. They generally are not harmful to humans, even though their bites can be irritating. Some people are allergic to the formic acid in their venom and can experience a reaction.

The biggest danger that crazy ants cause is to the native species of arthropods and birds in the areas they invade. Due to sheer volume, they have a detrimental impact on the native species, even disturbing the survival of nestling birds.

How To Get Rid of Crazy Ants

Controlling populations of crazy ants has proven difficult due to their massive numbers and their interconnected colonies. The trouble comes when you treat an affected area with an ant spray or powder to kill off one colony, but then other crazy ants from nearby colonies come to quickly take over the space.

To prevent crazy ants in the first place, keep your yard and home tidy to reduce the availability of food and places for them to nest. Compost piles, organic matter on the ground, like old leaves, and food that isn’t in airtight containers all provide the perfect homes and food sources for crazy ants.

If you find that you’re having a tough time keeping these pests away despite your best efforts, it may be time to call a local pest control specialist who specializes in ant control. An expert can track down nests, spot areas that might be drawing them in, and help rid your home of an existing crazy ant infestation. Taking measures to reduce crazy ant populations in and around your home will not only make your life more pleasant, but also support the native bird and insect populations.

Sep 27
Dealing With Swarms of Flying Ants
Most of us are familiar with wood-destroying carpenter ants, the small black ants that disrupt picnics, or other types of ...
View Article
Sep 07
Are Dark Rover Ants Dangerous?
Like many other kinds of pests, dark rover ants are attracted to your home as a source of food, moisture, ...
View Article
Jul 18
What To Know About European Fire Ants
European fire ants are a species of red ant predators that are often unknowingly transported from one area to another. ...
View Article