How To Control Flies in & Around Your House

We’ve all experienced a buzz near your ears, a quick tickle on your skin, or a surprise landing on the food you’re about to eat. Even though they seem both harmless and common, there are some fly species that bite and can carry disease.

Although flies do serve a purpose in the ecosystem, such as attacking bugs that eat crops and pollinating certain plants, most people don’t want them to nest or breed inside their homes. Learn more about fly species, how to identify them, and ways to prevent them from coming into your yard and home.

A fly is an insect of the order Diptera, which includes a wide variety of flying insects. Composed of both small and medium-sized insects, Diptera have a head, two working wings for flight, and another pair of wings that are much smaller, called halters. These smaller wings look like tiny dumbbells, and flies use them mainly for balance.

How To Identify Common Fly Species

Most flies are relatively small in size, but their body and eye color vary by type.

House flies are gray in body color with large reddish eyes. They measure about 1⁄8 – 1⁄4 of an inch long and have dark stripes on the middle section of their bodies (thorax). 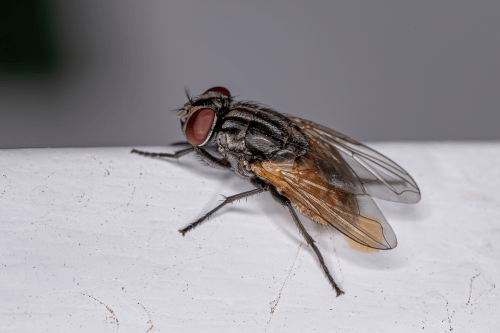 Blow flies are roughly the same size as house flies, but their coloring is a shiny blue or green. 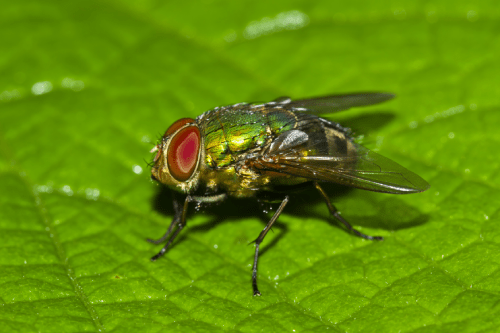 Fruit flies are tiny flies at just ⅛ inch long (much smaller than house flies).  Their bodies are long, rounded, and tan in color, and they have bright red eyes. 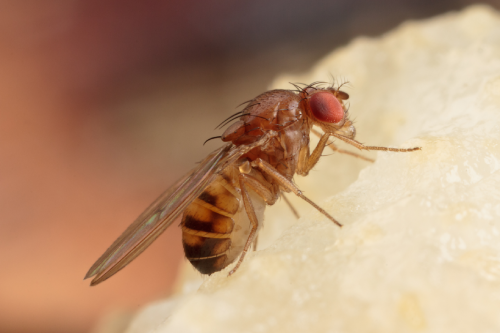 Horse flies are as large as an inch in length (much larger than a house fly). They have prominent eyes, short antennae, wide bodies with no bristles, and clear wings. 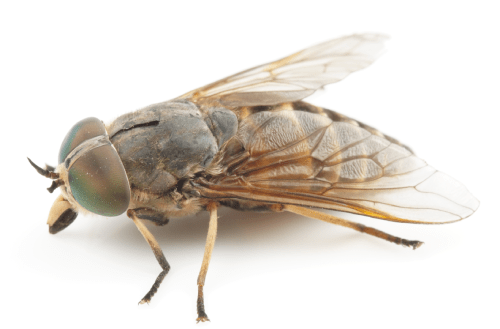 Flies usually choose to live close to their preferred food sources and near suitable breeding grounds, which are typically warm, moist locations.

The Life Cycle of a Fly

Adult flies can live for 15–25 days, but some can survive for as long as 2 months. If deprived of food, a fly will only live for 2–3 days.

Yes, you’ll tend to see flies more during warmer months. Flies become very active beginning in late May. Their peak season is late summer. Their breeding season comes to an end in October and they tend to be much less active when temperatures are less than 45 degrees Fahrenheit. During these colder months, flies are generally in their pupal stage buried 1–6 inches beneath the soil.  After the winter months, they emerge as adult flies and begin their mating cycle all over again.

What Do Flies Eat?

Flies, especially the common house fly, are generally carnivores. They primarily consume the rotting bodies of animals as well as manure. Flies are also attracted to and consider eating a lot of different things that you’ll find in or near your home, such as:

House flies can’t chew their food, as they don’t have teeth. Instead, flies have mouths that are like sponges, letting them soak up what they need to ingest.

They can transform solids into liquids by spitting or vomiting on their food, which turns it into very tiny liquid particles that they can then take in. The house fly has a mouthpart called a proboscis that it uses to suck up the food that’s been softened through its saliva.

Even though flies eat their food through their mouths, they actually taste the items they’re about to consume through their feet. This is why a fly will land on the items it’s considering ingesting before it decides to eat it.

How Do Flies Fly?

Flies only have two working wings for flight, yet they can move very fast and are able to take off rapidly from any type of surface, which makes them difficult to catch or swat. A house fly can flap its wings more than 200 cycles per second, and a tiny fruit fly beats its wings every 4 milliseconds.

These insects can move up and down, from side to side, and can even hover. Flies change their flight direction within milliseconds, which allows them to react quickly and avoid predators (and humans) attempting to swat at them. Their main predators include frogs, dragonflies, and a type of wasp called Fly Predators.

Because flies breed in waste matter and garbage, they can carry and transmit certain types of disease to humans and animals, including dysentery, cholera, E. coli, and other viruses. The germs on a fly’s legs and bodies can transfer to your skin or your food; however, it’s rare that you would get sick from one single fly landing. However, the longer a fly spends on your skin or food, the higher the chances are of bacteria and pathogens transmittal. If you’re unsure how long a fly has been on your plate, it may be best to discard the food and get a new helping.

Although the house fly cannot bite, other types of flies can. Biting flies choose their prey by sensing sweat and exhaled carbon dioxide from breath and looking for dark colors and body movements. They will then pierce the skin using their mouthparts. Some biting flies include the horse fly, stable fly, black flies, sand flies, and biting midges.

Sand flies are small flies, about 1⁄8 of an inch in length, with hairy wings that are brownish-gray in color. They’re mostly active between dusk and dawn and tend to live in the southern states. Sand flies will typically bite around the ankles and legs.

Bites from sand flies feel like a typical insect bite and result in red bumps on the skin that can become infected or inflamed. Sand fly bites can be treated with either hydrocortisone cream or calamine lotion to soothe itching and promote healing.

A horse fly bites with its scissor-like mouthparts, drawing blood that they then consume. The bite from a horse fly is painful and leaves behind swollen red bumps or a rash. Their bites are similar to those of a deer fly.

Treat a horse fly or deer fly bite by cleaning the area and applying an antiseptic ointment to lessen irritation, inflammation, and itching. Keep an eye on the wound for signs of infection, such as pus or a foul odor. The bite will usually heal itself in a few days.

If you suddenly start seeing flies swarming in your house, it means there’s likely an infestation in or near your home. Dozens of eggs may have recently hatched and could be nesting in a warm, moist area, such as the garage, attic, or in your garden.

Preventive strategies will help keep flies from entering your home. If flies don’t have those warm, humid spots to lay their eggs or don’t have access to the foods they’re attracted to, they are less likely to want to enter your house. To get rid of possible nesting areas or food sources, you can:

Feb 04
How to Get Rid of Ants in Your Business
Whether you’re in an office building, retail storefront, restaurant, or small business space, an ant problem can become overwhelming and ...
View Article
Feb 03
Restaurant Pest Control: Requirements You Need to Know
One of the most common things that can kill a restaurant’s reputation is the discovery of a pest problem. But ...
View Article
Jan 31
Why do Mosquitoes Bite
Mosquito bites aren’t just annoying and itchy — they’re also how mosquitoes transmit germs and diseases to humans. To prevent ...
View Article