What Are Wolf Spiders and Are They Dangerous?

Wolf spiders are known for their robust size and quick sprint, but these interesting arachnids play an important part in their ecosystems, too. There are thousands of species of wolf spiders, and they have adapted to live in a huge variety of regions across the world.

Learn where to find them in the U.S., what types of habitats they prefer, how to identify them, and what to do if you find them in your home or yard.

What Are Wolf Spiders?

With variations from tan-brown to black, wolf spiders are most easily identified by their unusual sets of eyes, 8 in total. Wolf spiders sport two large eyes in the center, two posterior/lateral eyes on either side and a row of four smaller eyes that almost look like a mustache. 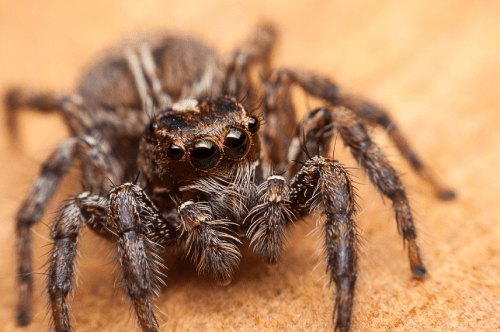 How Big Are Wolf Spiders?

The bodies of wolf spiders can range from 1 to over 4 inches, including leg span. The larger species are generally found in warmer climates in Asia, South America, and Australia, with the largest at 4.7 inches.

Where Do Wolf Spiders Live?

Wolf spiders are found across the world, including the U.S. In the U.S., they prefer meadowlands, rocky gravel, sand, and areas with leafy ground cover. They can also climb trees and other objects if they need to, but generally prefer to stay on the ground.

What Do Wolf Spiders Eat?

These carnivores prefer to eat insects that live on the ground, like crickets and other spiders, since they do not spin webs. They stalk and hunt these insects instead of waiting for their prey to come to them. Large female wolf spiders might take on reptiles like lizards or even small birds, but these types of wolf spider species are less likely to be found in the U.S.

Wolf spiders are not dangerous to humans. While they are venomous, their venom is used to immobilize and kill their prey. These nocturnal ground-dwellers are only likely to bite people in self-defense if they are handled or trapped. If you are bitten by a wolf spider, you may get symptoms such as a painful red mark at the site of the bite, but it will typically go away on its own. Always seek medical attention if you have concerns about any insect or spider bite or sting.

Why Shouldn’t You Squish a Wolf Spider?

Despite their potentially unnerving speed and appearance, these critters are not dangerous. They roam the ground, helping to control the populations of other insects that can be more meddlesome pests.

Squishing, or killing them in general, isn’t necessary as they aren’t generally considered to be harmful to humans and are beneficial to their ecosystems. Plus, if you try to squish a wolf spider, it may be tempted to bite you because it feels threatened.

How To Get Rid of Wolf Spiders

Wolf spiders are solitary arachnids that you’re not likely to find inside your home. If you do find a wolf spider in your home, it is most likely just wandered in through a crack or open door at ground level while in search of an insect snack. The best way to keep them out of your house is to make sure that all cracks and gaps around the home are sealed, and that all door sweeps and weather stripping are in good repair.  Controlling other insects in your home will keep a wolf spider away—if there’s no food to be found, they have no incentive to come indoors.

You may find that you see them in your yard if there is a plentiful supply of food for them. These hunters are primarily nocturnal, roaming the ground in search of insects and spiders during the night. The more insects in your yard, the more likely you are to have wolf spiders passing through.

If you want to encourage them to hunt elsewhere, keep your yard free of areas that harbor insects, such as piles of leaves, unkempt shrubbery, and yard waste. However, as mentioned above, these critters stalk insects and other spiders along the ground, helping to keep other insect populations in check. Since wolf spiders provide natural pest control, it isn’t necessarily a bad thing to have them roaming your yard at night to keep other pests at bay.

Feb 04
How to Get Rid of Ants in Your Business
Whether you’re in an office building, retail storefront, restaurant, or small business space, an ant problem can become overwhelming and ...
View Article
Feb 03
Restaurant Pest Control: Requirements You Need to Know
One of the most common things that can kill a restaurant’s reputation is the discovery of a pest problem. But ...
View Article
Feb 02
Condo Living: How to Get Rid of Spiders on Your Balcony
Spiders can easily find corners and other spots on your outdoor balcony to make their web and settle in. Most ...
View Article