Like many other kinds of pests, dark rover ants are attracted to your home as a source of food, moisture, and shelter. That’s why these small ants can often be found creeping through the cracked walls in bathrooms and kitchens since they’re after food and water.

The good news is that dark rover ants don’t pose any risks to your home’s structure, don’t transmit disease, don’t bite or sting, and aren’t dangerous to people or pets. However, we know that any type of pest infestation can cause a headache, even if no danger is present.

Significantly smaller than your typical indoor ant, dark rover ants only grow to be between 1–2mm in size (queens can be up to 3mm). They range in shades from red to brown, and have soft, fine hairs growing out of their abdomen, which is separated from the rest of their body by a defined waist. 9 Segmented antennae help them experience the world and navigate small, dark spaces for shelter or food. These specific types of ants also have larger eyes. 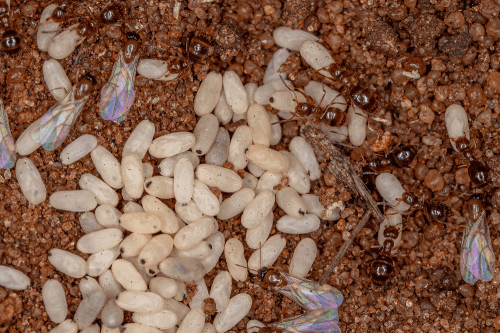 Dark rover ants typically eat plant nectars and honeydew (a sugary excrement substance produced by insects that feed on sap) as well as any sugary substances they may find in your home. They may also eat other insects including the cactus moth (which is an invasive pest).

In general, ants can live as long as multiple decades or as little as a few weeks. This is based on a few factors including their position in the colony (i.e., worker vs. queen) and gender (males usually die off after mating). Mating season generally occurs from May–August.

A dark rover ant colony is relatively small (between 100 and 1,000 members); however, they often set up new colonies near existing colonies. It has not been observed that dark rover ants know how to set up supercolonies that work together, though (unlike European Fire Ants).

Where Do Dark Rover Ants Live?

These particularly tiny ants are native to Argentina and Paraguay. They were introduced to the U.S. in the 1970s, first seen in Louisiana, but are now commonly found in southern states including California, Arizona, New Mexico, Georgia, and Nevada.

Dark rover ants like to set up nests in soil, at bases of trees, in leaf litter, wood piles, and mulch. These areas are usually moist and provide shelter.

Only dark rover ants that mate and reproduce fly. Once they find a mate, they shed their wings when they land and start their new colony. You may see flying rover ants around your house in the warmer seasons which are their mating months of May to August. This is a signal that you may be dealing with a dark rover ant infestation because the winged ants are looking to set up a new shelter for their colony.

How to Get Rid of Dark Rover Ants

Similar to other basic types of infestations, rover ants will usually leave your home alone if you:

However, if these methods don’t get the results you’re looking for, it may be best to call a pest control professional like Hawx, who is trained to handle insects like ants. Our services can target nests and address any new colonies that may be trying to move in.

Feb 04
How to Get Rid of Ants in Your Business
Whether you’re in an office building, retail storefront, restaurant, or small business space, an ant problem can become overwhelming and ...
View Article
Feb 03
Restaurant Pest Control: Requirements You Need to Know
One of the most common things that can kill a restaurant’s reputation is the discovery of a pest problem. But ...
View Article
Jan 31
Why do Mosquitoes Bite
Mosquito bites aren’t just annoying and itchy — they’re also how mosquitoes transmit germs and diseases to humans. To prevent ...
View Article