What To Know About European Fire Ants

European fire ants are a species of red ant predators that are often unknowingly transported from one area to another. You might find them in a bag of soil, a leaf pile, in mulch, inside a potted plant, or a rotting log or tree root.

Once settled into a new environment, their colonies can grow very quickly, making infestation reduction services crucial to containing their spread. Learn more about what European fire ants look like, what they eat, where they live, and if they’re dangerous.

What Are European Fire Ants?

These small red ants, scientifically called Myrmica rubra, are distant relatives of the more well-known fire ants, or Solenopsis, which are found in the southern United States and Latin America. The European fire ant, however, migrated to North America from northern Europe and Asia. It’s believed they arrived on the continent in the early 1900s, infesting plants that were imported to Maine.

European fire ants look like very small ants that are reddish-brown in color. Their bodies are divided into two main segments, with backward-pointing spines on the middle segment. This spine section, though, is only visible with the help of a magnifying glass. 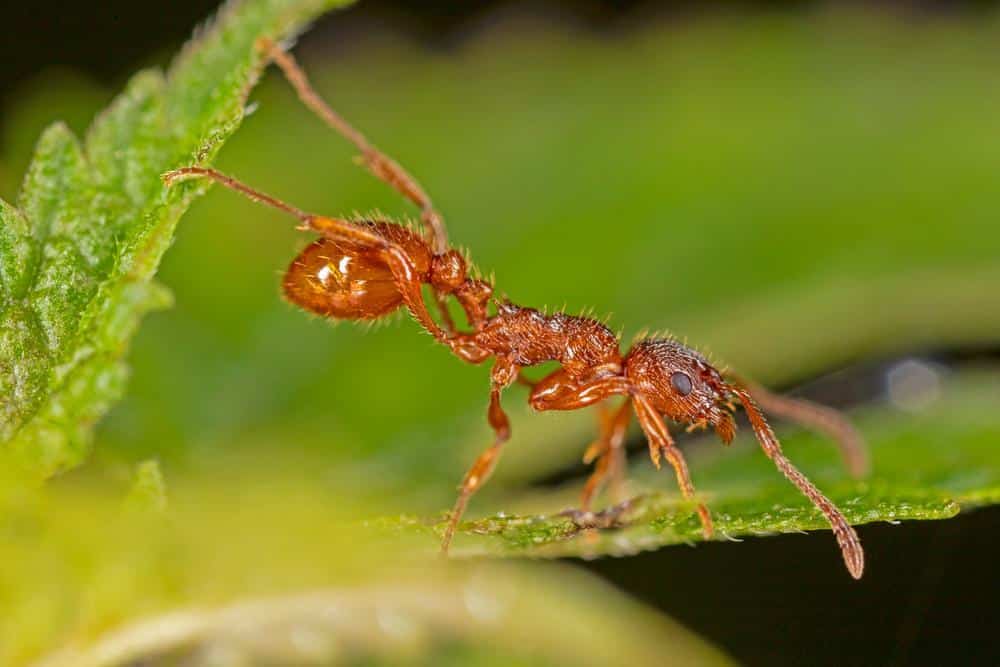 These insects are quite tiny, measuring just about 3/16 inches long, with the queens growing a little bigger. In a large nest, there can be multiple queens and nests that can be easily moved and relocated during a season.

The queen of a European fire ant colony can live for as long as 7 years. She can leave her original colony and mate with other ants to form supercolonies. These large colonies can take over the habitats of other ant species and alter native plant communities.

Where Do European Fire Ants Live?

European fire ants tend to make their homes in moist soil and areas of high humidity. It can be difficult to spot their nests as they don’t build up mounds of soil like other fire ant species. These critters are often found living beneath stones, under fallen trees, in yard debris, or inside potted plants.

What Do European Fire Ants Eat?

Knowing what these insects like to feed on can be helpful in preventing an infestation from taking hold. This invasive ant species is attracted to sugars and sweets, particularly littered foodstuffs left behind by humans. They’ll eat other insects, such as aphids, which excrete honeydew, and they also like to eat flowers and their nectars, which can interfere with the populations of other natural flower pollinators.

These invasive insects can be dangerous and aggressive to humans and their pets. European fire ants have stingers. If they feel threatened by a person or animal accidentally stepping on a nest, for instance, the ants will swarm around the threat in large numbers, often stinging multiple times to protect their territory.

The sting from this type of fire ant contains a venom that can cause the skin to feel burned. A red bump or blister-like sore will also often appear on the skin after a bite or sting. In certain cases, especially for people who are very sensitive to the ants’ venom, symptoms like nausea, chest pains, and more severe issues can occur up to hours after an attack. If these symptoms persist, it’s best to seek immediate medical attention.

These insects are not only a threat to people and pets, but they also have a negative ecological impact on the areas where they live. European fire ants can disrupt the habitats of other native ants, plants, birds, and insects.

How To Get Rid of European Fire Ants

To prevent an invasion of European fire ants, homeowners can do the following:

It can be extremely difficult to get rid of European fire ants once an infestation has occurred. Controlling the nests of these invasive insects on your property is best accomplished with the assistance of professional pest services, such as ant services offered through Hawx Pest Control.

A reputable pest service company will first inspect your property for the presence of European fire ants. Locating the number of nests on a property will help determine the types of treatment needed, which may be best to do biannually. Chemical bait treatments in the form of granules are very effective for large infestations that cover a lot of ground. Liquid sprays and baits are also often used to control European fire ants, keeping your family members and pets safe from stinging attacks.

Sep 27
Dealing With Swarms of Flying Ants
Most of us are familiar with wood-destroying carpenter ants, the small black ants that disrupt picnics, or other types of ...
View Article
Sep 07
Are Dark Rover Ants Dangerous?
Like many other kinds of pests, dark rover ants are attracted to your home as a source of food, moisture, ...
View Article
Jul 23
What Are Crazy Ants and How Do You Get Rid of Them?
You might have heard them called hairy crazy ants, tawny crazy ants, or rasberry crazy ants—named for exterminator Tom Rasberry, ...
View Article