What Are Argentine Ants and How Do I Get Rid of Them?

Argentine ants may look like other ants, but they are actually invasive pests introduced to the U.S. from South America. Now they can be found throughout the world, especially in  warm-climate states like California. Because they aren’t native, they can pose threats to other species of ants, insects, birds, and plant life by running them out of their habitats or eating them as part of their diet.

Find out more about Argentine ants, including what they look like, where they live, if they’re dangerous to people, and how to get rid of them in our guide below.

What are Argentine ants?

Argentine ants originated in South America, but can now be found on many continents of the world. It is rumored that they were originally introduced to the U.S. during a New Orleans coffee purchase from Brazil in the 1800s. Regardless of how or why they got here, Argentine ants are here to stay.

They look like most other ants—six legs, brown or black in color, oval-shaped body, and antennae. One unique feature of an Argentine ant is the musty odor they omit when crushed.

They tend to build shallow, small nests in protected habitats like a wood chip pile, soil, or other natural debris that allows them to have security from predators and the elements. Each nest has several queens and worker ants. The worker ants can live as long as 10–12 months, while queens can live for a few years. Queens also have wings in their early life stages; however, they shed their wings as they mature and rarely use them to fly.

Some queens and workers leave their nests to establish new nests nearby. All of the nests in one area then work together as a large colony. 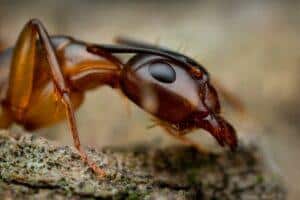 What do Argentine ants eat?

These ants prefer to eat honeydew, the excrement from aphids and mealybugs. However, they will eat any sugary human foods, pet foods, and meats that are left out unattended. They also eat dead insects.

Remember, storing your leftover food in sealed containers can minimize any interest these ants may have in setting up camp in your home.

Argentine ants cannot sting but they are known to bite (don’t worry, it’s not painful). They can also spread disease. Because of this, you’ll want to act fast as soon as you notice an infestation, as bacteria can spread to any surface they touch.

These ants are most dangerous to their own environments. They pose threats to native ant species, nesting birds, hatching eggs, and plant and vegetation grown in the area.

In California, Argentine ants are the most prominent insect pests in the state. They thrive well in this warmer climate because it’s similar to the climate they originate from. They’re known to be extremely aggressive with California-native ants, which disrupts the natural ecosystem of the state.

How to get rid of Argentine ants

Like most insect infestations, the tips for locating and stopping an Argentine ant infestation are:

While these are great habits for any household, we recognize that these practices may not be enough to control your ant problem. That’s why calling a professional pest service like Hawx may be the best option. These services have targeted methods for finding ant nests and colonies outside of your home as well as steps they take for getting rid of the colonies and preventing new ones from forming.

Nov 21
U.S. Homes Under Attack – Which are the Deadliest Pests in our Backyards?
Pests can be much worse than unwelcome, annoying guests in your home. A recent study from the Wilderness Medical Society ...
View Article
Oct 24
A Landlord’s Guide to Pest Management in Rental Properties
Pests in a rental property can cause conflict between tenants and landlords. With over 16 million American homes reporting seeing ...
View Article
Sep 27
Dealing With Swarms of Flying Ants
Most of us are familiar with wood-destroying carpenter ants, the small black ants that disrupt picnics, or other types of ...
View Article