What Are Hobo Spiders & Are They Dangerous?

If you live in the northwestern United States, you have probably heard about hobo spiders and have likely seen their webs. These small spiders are quick runners with big bites. But are they dangerous to humans?

Learn more about hobo spiders, including what they look like, why they bite, and how to get rid of hobo spiders if you have one in or around your home.

What are hobo spiders?

Hobo spiders are quite small, averaging between 7–16 mm long at maturity. The male hobo spiders are generally smaller than female spiders, although they are such quick runners, it may be hard to tell at a glance which is which. They are classified as funnel-web spiders, due to their characteristic tornado-shaped webs. It’s important to note that there are other funnel-web spiders, and not all webs shaped like tiny tornadoes are home to hobo spiders. 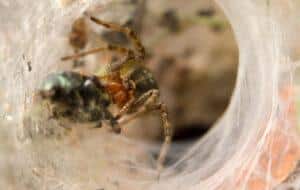 They are sandy brown in color with darker brown areas on their legs and upper torsos. They also have a yellow and gray pattern on their backs. An important way to distinguish hobo spiders from other species of funnel-web spiders is by the lack of darker brown banding down their legs. Hobo spiders are often confused with brown recluse spiders, so it’s important to know the differences. If you can get close enough, you’d see that hobo spiders have eight eyes in two straight rows and six to eight teeth.

As mentioned above, hobo spiders are most commonly found in the Pacific Northwest in the United States, although they can also be found as far east as Utah. They weren’t seen in the U.S. until the 1930s, when they were introduced from Europe. They do not generally seek out human homes to make their nests, preferring less competition in places like dry, rocky areas, cracks in retaining walls, and piles of logs.

How long do hobo spiders live?

There is some debate on the lifespan of hobo spiders, but, in general, they can live several months or up to one or more years.

Hobo spiders mate from June to September and lay their eggs by the end of the summer. Males die off in October while females can either die in late autumn or spend the winter in a warm shelter and make it to the next season. Eggs hatch in the spring.

What do hobo spiders eat?

Due to their poor eyesight and desire for less competition, hobo spiders aren’t picky eaters. Any insect small enough to wander into a hobo spider’s web is likely to become a meal.

The web of a hobo spider isn’t sticky like other spiderwebs, and insects don’t get caught in it. Rather, the hobo spider is an ambush-style predator and uses its speed and agility to catch prey that wanders into its web.

Hobo spiders do bite, and their bites can be painful. Although the CDC had included hobo spiders on their list of ‘medically relevant’ spider species, they’ve removed them from the list because their bites rarely cause fatalities and other harmful symptoms aside from pain.

Hobo spiders hunt from inside their funnel-shaped webs and are unlikely to roam around humans. A bite from a hobo spider is generally sustained due to accidental contact—where a person inadvertently threatens the spider by trapping it.

For example, if you’re leaning against a rock retaining wall where a hobo spider is making its nest, you could cause it to feel threatened and want to defend itself. Hobo spiders have poor eyesight, so encounters with humans that end in a bite are often due to mistaken identity.

How to get rid of hobo spiders

It’s not common to find hobo spiders inside houses, where they are likely to run into humans (which they don’t want to do) as well as find competition from other spiders. If you do find that you have hobo spiders inside your house, it may be because there are areas they find amenable for their webs in the spring or places they can find mates during the summer months.

If you have an unfinished basement with any cracks or access to the outside, a hobo spider may potentially wander in and make a web there. Generally, getting rid of them in your home is just a matter of sealing up those access points because they cannot climb walls or slick surfaces to easily move around your home. If you do find that they are a consistent problem, a professional pest service like Hawx, can put together a pest management plan to help you get these unwelcome houseguests to vacate.

To detect if you have hobo spiders, you may have to examine their webs, which are more easily detectable than the small, quick spiders who make them. However, with some regular yard maintenance, such as cleaning up piles of logs or sealing cracks in walls, the chance of you or your family sustaining a bite from a hobo spider is fairly minimal.