What To Do if You Find a Black Widow Spider

Although notoriously recognized for their red markings and feared for their venom, black widow spiders actually tend to avoid humans and their bites rarely result in death. These arachnids may inspire fear, but the truth is their controlled presence can actually be helpful to the home and its environment. Learn more about how to identify black widow spiders, what to do if you find one, and how to prevent infestations in your home.

What Are Black Widow Spiders?

This species of arachnids is scientifically known as Latrodectus, more widely called black widow. All arachnids are identifiable by their eight legs and lack of antennae. Their bodies are divided into two sections, with the thorax in front and the abdomen in back.

A black widow spider is usually quite easy to identify, although they’re not typically out in the open. A female black widow has a shiny, black body with a rounded abdomen and is about 1.5 inches long. The markings on her abdomen appear as an hourglass shape that’s usually red in color, but it can also be orange, yellow, or even white.

Male black widows are smaller, gray or brown in color, and have red or pink spots rather than the hourglass pattern. The male spider is somewhat reclusive and is rarely seen by humans. 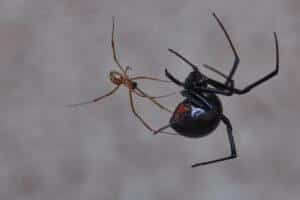 Where Do Black Widow Spiders Live?

Black widow spiders live mostly in the southern and western areas of the U.S., although some do live in the northeastern states, too. They thrive in forests, deserts, grasslands, and urban or suburban areas. Black widow spiders like to live near people’s homes because the lights of the house attract insects (their prey) at night.

These arachnids can be found in dark, undisturbed areas, but they may also crawl into areas you’d least suspect, like a pair of gardening gloves lying around. The places you’ll most often find black widows around your home include spots like:

What Do Black Widow Spiders Eat?

A black widow spider can live for as long as 1–3 years in an environment that provides them with the food they need to eat. These critters build webs to catch their prey. The webs don’t look like the symmetrical webs weaved by orb spiders. Instead, the webs are tangled and messy-looking. 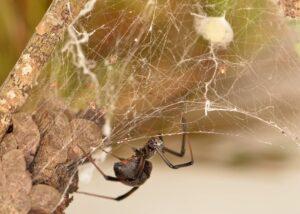 The web serve as a trap for prey, which can include:

The black widow spider bites the captured prey to stun it, and then injects it with venom to paralyze it. Then, the spider carries the insect away to consume it.

Although the black widow spider is notoriously known for mating and then eating or killing her mate, this doesn’t always occur. In fact, it only happens in about 2% of black widow spider mating cases. More often than not, the male scurries away quickly after mating. Once baby spiders hatch, though, these offspring can eat their siblings as they emerge from their eggs.

Are Black Widows Dangerous To Humans?

Black widow spiders are not naturally aggressive toward humans, but they will bite if they feel threatened—like if a person unknowingly reaches into its territory and disturbs it.

The venom of black widow spiders has been found to be 15 times stronger than that of a rattlesnake (luckily the amount you’d get into your system is much less than you’d get from a rattlesnake bite). A black widow bite can cause reactions in humans, although the bites rarely result in fatalities.

If you are bitten by a black widow , you may experience the following symptoms:

Within 30 minutes to 2 hours, more serious symptoms may or may not occur after a bad bite, including:

If you believe you have a black widow bite, wash the area with soap and water. Apply an ice pack to the site: 10 minutes on, 10 minutes off. Elevate the spot that’s been bitten to an area above the heart. For example, if the bite occurred on your hand, place your arm over your head.

If you experience any of these symptoms, you should seek medical attention. Treatment might include medications for pain and muscle spasms. You may also need a tetanus shot if you haven’t had one in the past five years.

Small children and elderly people are most susceptible to the dangerous after effects of a black widow spider bite and should be taken to the hospital for treatment immediately, where an anti-venom will be administered.

What To Do if You Find a Black Widow Spider

If you find a black widow spider on your property, chances are very good there are more of them around.  Black widow spiders are fast movers, especially if they feel threatened. You can try using an insecticide spray or vacuuming up the spider, but the safest thing to do is to call a professional pest company.

To keep them out of your home, seal any entry point gaps with foam or caulk near the foundation. Keep kitchens and other areas clean and free of food that might attract insects inside. This will keep black widow spiders out too, since there will be no food for them to eat inside.

A few other tips for preventing black widows include:

How To Get Rid of a Black Widow Infestation

Since black widow spiders can bite and become aggressive when threatened, it’s best to call in a professional pest service like Hawx Pest Control to safely keep these arachnids from inadvertently causing harm to humans. Professional spider services include routine tasks and checks that reduce an infestation of black widow spiders and protect your property from their return.