How To Get Rid of Japanese Beetles

Home gardeners and Japanese beetles do not get along well because these insects can do serious damage to a variety of different plants, trees, and grasses. Learn more about Japanese beetles, where they live, what they eat, and how to get rid of them if they’re in your yard or home.

What are Japanese beetles?

The Japanese beetle, or Popillia japonica, is native to Japan, but the species can now be found throughout many states within America.

These insects are a little under ½ inch in length. They have shiny, vibrant, metallic-green or gold bodies. Their strong wings are concealed with a copper-brown wing cover, called an elytra, which lies flat on their backs when not flying. The very edges of their backs have small patches of white hair. Male and female Japanese beetles look very much alike, but the female is usually a little bit larger.

These insects tend to live in any area where their preferred food sources are located. They can be found living in forests, on grasslands, farms, and in urban areas.

How long do Japanese beetles live?

The adult Japanese beetle can only expect to live for 30–45 days. During that short lifespan, this insect is extremely mobile, able to fly, and can invade hundreds of gardens, up to miles away from their place of birth. The damage they cause to plant life is severe, because they attack in groups and can cover a lot of ground in a short period of time.

Although the adult phase of this insect’s life is a brief period of time, the entire life cycle of a Japanese beetle takes about one year. The litter size of one female Japanese beetle is typically between one to five eggs, which hatch in a couple of weeks.

The larvae of Japanese beetles are known as “white grubs.” The grubs have pale bodies, a C-shape, and are about 1/8″ long, with the mature grubs growing up to an inch long. The grubs reach the adult stage of sexual maturity just two weeks after hatching, yet the larvae remain underground during the autumn, winter, and spring months until they are ready to emerge in summer. During that time, the grubs are feeding on the dirt and grass roots.

In early summer, the adult beetles leave the ground and begin flying in search of food. This is when these critters are most active in homeowners’ gardens and yards. Since the adult insects live for up to 45 days, they are actively feeding on plants and fruits well into July and August.

What do Japanese beetles eat?

Japanese beetles eat many different types of plant life, including fruits. These garden invaders can seek out and eat 300 species of plants,  feeding on the tops of plants and working their way down as well as on flowers, leaves, and overripe or damaged fruit. Japanese beetles come out to feed and are most active during the daylight hours, especially on warm, sunny days. 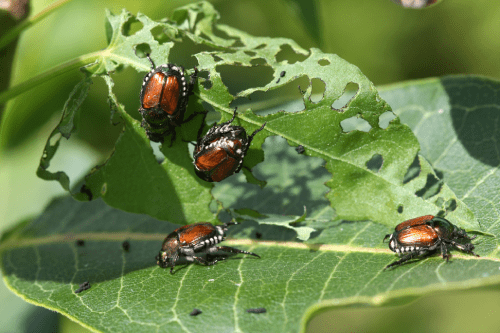 The adults tend to chew on the tops of foliage, leaving behind a skeleton of what the leaves should normally look like. When Japanese beetles gorge on trees, the leaves look like they’ve been damaged in a fire. These insects will eat complete rose blossoms and any delicate leaves they find.

Some plant species that adult Japanese beetles prefer feeding on include:

The damage inflicted on fruits, vegetables, and herbs by these adult insects can make most parts of the plants inedible and have a negative effect on their growth.

One of the reasons an infestation of Japanese beetles is so devastating for home gardeners and agriculture is that the insects tend to feed in large groups, called swarms. This happens because they are attracted to the vaporous compounds released by the chewed on, damaged leaves. When feeding in large groups of grubs, the grubs can cause great devastation to a lawn, killing large swaths of grass.  By chewing grass roots, the grubs cause lawns to turn brown and eventually die.

Grubs can also be stressful to homeowners who enjoy keeping their lawns in good shape. Japanese beetle grubs, once they move onto the surface of the soil, begin eating roots, plants, animal residue, and other organic matter, which makes it hard for gardens to grow and thrive.

Japanese beetles have a few predators that act as a natural method of pest control, but they aren’t very effective at keeping the population of this insect under control.

These natural predators include:

How to get rid of Japanese beetles

Having swarms of Japanese beetles feed on your trees, shrubs, flowers, and vegetable gardens is disheartening and can destroy some of your yield for that season. Homeowners can try different methods to control Japanese beetles, although it’s very difficult to completely protect properties from this unwelcome pest.

A few methods to get rid of Japanese beetles include the following:

How to get rid of Japanese beetles in your house

If you start seeing Japanese beetles inside the house, someone may have accidentally brought a few that were living in infected plants. These insects may also enter homes looking for shelter or to avoid cold weather through foundation cracks or openings in door and window frames.

An infestation of Japanese beetles can grow quickly. To stop them from multiplying, you can try vacuuming them up as you notice them. Remember to empty the canister or bag immediately. Another option is to put traps around the home to lure them.

If Japanese beetles seem to be overtaking your garden, trees, lawn, shrubbery, or your home, it may be time to contact a professional pest control company. Professional management of Japanese beetle infestations can help with grub identification and control, in addition to managing the number of adult beetles feeding on plantings.