What Are Sand Fleas and Do They Bite?

“Sand flea” is a term that is often used to describe any type of small insect that is found on beaches. However, a sand flea is a real type of insect. There are two important categories of sand fleas to learn about so you know where you might find them and if you need to be aware of potential danger.

What are sand fleas?

Sand flea, sand hopper, beach fleas, or beach hoppers all have one thing in common – they’re not really fleas at all! Sand fleas are, in fact, crustaceans. In the same family as crabs and lobsters, these tiny critters get misnamed due to their ability to jump quickly, much like a flea.

Sand fleas range in size from 0.25–1 inch long and can be found in a variety of colors, including green, red, gray, and tan. Their coloring can sometimes vary on different parts of their bodies between green and gray. The bodies of common sand fleas have seven distinct segments, resembling a shrimp or prawn.

Their two sets of antennae are often muted red in color. One set is much smaller and sits atop the larger pair.

Where do sand fleas live?

The common sand flea can be found along the beaches of the Atlantic region and Gulf Coast. These tiny hoppers bury into the sand at the high tide line during the day and are most active at night.

You might not have occasion to run across a sand flea during the day, unless you’re digging into wet sand, exploring along the waterline, or turning over logs or rocks.

The more nefarious chigoe flea, which is often confused with the common sand flea, is more commonly found in the Caribbean. It was introduced there from Africa. There are relatively few instances of chigoe fleas in the U.S. though, but it’s not impossible to find one here. Because the chigoe flea often bites and lays eggs on their host’s feet, the host can be exposed to any number of bacteria and viruses found on the ground through the open wound. 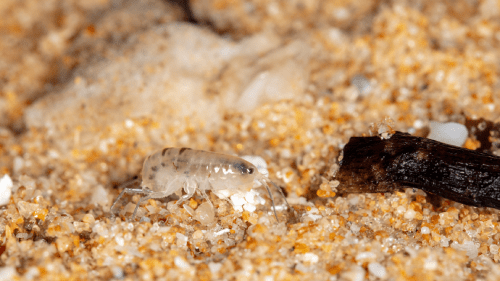 The common sand flea does not bite at all; rather, it feeds on organic debris that it finds in its ocean home. If you’re in the U.S. and encounter a biting insect on a sandy beach, you’re likely crossing paths with a sand fly, or more rarely a chigoe flea, rather than a common sand flea.

Sand flies are insects that are commonly found on U.S. beaches. They do feed on human and animal blood. These insects are likely the responsible party if you find that you have an itchy bite after a beach day. Due to their ability to spread disease, sand flies are considered a health concern.

Common sand fleas present no danger to humans or animals. They prefer peacefully burrowing in the sand and helping to filter organic debris out of our ocean water.

Sand flies and chigoe fleas, which are often confused with common sand fleas, do present health risks due to their propensity to bite people and animals and spread disease. Chigoe fleas, in particular, are dangerous because their eggs grow inside of the bite they leave behind, creating a painful wound that is uncomfortable on its own, but more importantly, puts the afflicted host at risk for a number of different infections.

Can you bring sand fleas home?

Common sand fleas are crustaceans, not insects, and need ocean water to survive. While you could pick one up on your body or a beach towel, they won’t live for long away from the water.

Chigoe fleas are insects that can be picked up in the sand and transported to other locations. If you encounter them on a tropical vacation, it is possible to bring them back with you where they can potentially live on local beaches. This is unlikely, however, and instances of this happening are infrequent.

How to avoid sand fleas

Since sand fleas aren’t very present during the day, as long as you don’t dig into the sand too deeply, you won’t find sand fleas around your beach area.

If you live in an area where sand flies are present, you can protect yourself against them with insect repellent, if needed.

Chigoe fleas also respond to insect repellent. Spray it on your body, including the tops and soles of your feet. Insect repellents with DEET are the most effective, although coconut oil has also been found to work as a natural alternative.

To sum up, the term “sand flea” can be used to cover a wide variety of critters. The common sand flea, which is actually a crustacean, not a flea, is found along U.S. beaches, but is not dangerous to humans or animals.