How To Get Rid of Boxelder Bugs

Boxelder bugs are a common, colorful sight across North America. These critters are unique characters in the insect community, with many features that make them intriguing. Learn more about boxelder bugs, what they look like, where they live, and if they can cause damage to your home.

What are boxelder bugs?

Boxelder bugs are non-predatory insects that are found in all states in the U.S. They feed on organic material only and do not cause significant damage to your home or property. The excrement of a boxelder bug can stain lighter-colored materials like walls and floors.

Their most notable characteristic is the foul odor they emit when they’re crushed. If you find one of these bugs in your home it’s best to capture them and release them outdoors to avoid the stench they’ll emit if you squish them indoors.

They grow to about 0.5 inches long and have three orange stripes immediately behind their heads that are perpendicular to their other orange markings. 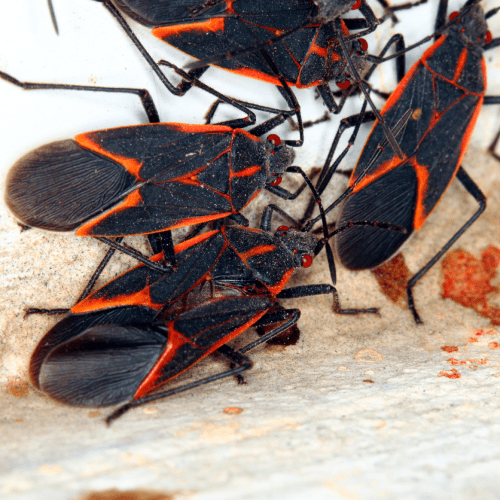 What do boxelder bugs eat?

Boxelder bugs consume seeds from boxelder and maple trees exclusively. Because of their niche diet, these critters do not damage the wood in your home, even if they are found overwintering indoors. Even when they feed on maple or boxelder trees, it does not cause noticeable damage or blight to the tree.

Boxelder bugs do not bite humans or animals and are not dangerous. The worst thing you might see is the face made by a curious dog or cat that munches on one of these insects, since their defense mechanism includes a powerfully unpleasant, (but not harmful) taste.

Due to their foul smell and taste, boxelder bugs have few natural predators. Occasionally a spider will make a meal of a boxelder bug, but for the most part, even birds stay away from them.

Where do boxelder bugs live?

Boxelder bugs can be found all across the U.S. and Canada, preferring forested areas that are full of boxelder, maple, and ash trees.

These insects love a warm spring followed by a hot, dry summer, so when the weather is favorable, you might notice an increase in boxelder bugs during the summer months.

They also prefer warm and sunny locations, which can lead them to overwinter inside your home, especially in south or west-facing areas.

How to keep boxelder bugs away

The best way to keep boxelder bugs away from your home is to make sure that any gaps in your doorways or windows and that any cracks are sealed up before fall and winter hit (when these bugs want a warm place to live).

As fall approaches, take the time to walk around the inside and outside of your home, checking for any areas that need to be sealed. Boxelder bugs can squeeze through even tiny cracks.

Check your foundation for any areas that need to be patched as well as gaps around doors, especially at ground level. Homes can shift over the seasons, causing door frames to develop cracks that boxelder bugs can sneak through. Weather stripping around your door frames will go a long way toward keeping these critters outdoors, as well as helping to reduce your heating costs over the winter months.

How to get rid of boxelder bugs

If you do find that you have boxelder bugs overwintering in your home, the most reliable way to get them out is to physically remove them. They are resistant to many common insecticides and often overwinter inside your walls, where it would be tricky to spray an insecticide without removing portions of drywall, etc. Since their presence does not cause damage, there should be no need to go to such lengths to remove boxelder bugs from your home. If you find that your infestation is quite large, it may be best to call a pest control professional to assess the situation and determine the best plan for removing them.

Seeing boxelder bugs in your yard or other outdoor areas is perfectly normal. Since they do not cause any damage to your trees, they can be left to peacefully graze on seeds and plant matter.

The boxelder bug is a harmless critter that won’t cause damage to your home like other insects. If you seal up cracks and gaps in the fall, you’re not likely to have an issue with boxelder bugs. Instead of squishing them, avoid their stinky odor by either vacuuming them up or catching them and delivering them back to their outdoor home.